Edward Nelson said "First quantization is a mystery, but second quantization is a functor". This functor takes the Hilbert space $H$ representing a quantum mechanical system, and gives its Fock space $F(H)$, representing a multi-particle system with any number of indistinguishable copies of the original system as in quantum field theory (I am considering the bosonic case). In a categorical analysis of the harmonic oscillator, Vicary revised Nelson's slogan to say "second quantization is a monad" - that is, the functor in question is equipped with some extra algebraic structure, making it the "Fock Monad" $(F,\eta,\epsilon)$.

Groupoidification is one of a number of approaches to "categorifying" quantum-mechanical systems: finding higher-categorical analogs of those systems. It uses a 2-category Span(Gpd) whose objects are groupoids, and whose morphisms are "spans". This has had some success in describing extensions of topological field theory to systems with boundary, with the "categorified" theory describing the evolution of open systems, which can be composed along their boundaries, over time. In this talk, I will use this framework to describe a categorification of $F$ to the "Fock Pseudomonad" which can be defined in any suitable 2-category, and the compatibility of this pseudomonad in Span(Gpd) with that in 2-Hilbert spaces, and, under the "degroupoidification" map, with the usual Fock construction on Hilbert spaces. 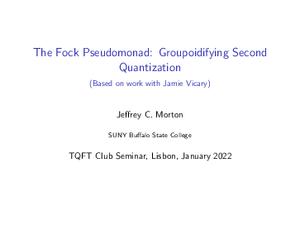